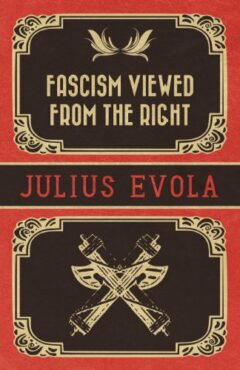 You are viewing: Fascism viewed from the right

Fascism viewed from the right

In this book, Julius Evola analyses the Fascist movement of Italy, which he himself had experienced first-hand, often as a vocal critic, throughout its entire history from 1922 until 1945. Discussing – and dismissing – the misuse of the term ‘fascism’ that has gained widespread acceptance, Evola asks readers not to allow the fact of Italy’s defeat in the Second World War to distract us from making an objective analysis of the ideology of Fascism itself, since the defeat was the result of contingent circumstances and the personalities of those who led it, rather than flaws that were inherent in Fascism as an idea. Evola praises those aspects of Fascism which he believes to have been in accordance with the best traditions of European governance, in particular the Classical Roman tradition, while he remains critical of those aspects which ran contrary to this ideal, such as its socialist, proletarian and totalitarian tendencies, as well as what he saw as its petty moralism. Evola also distinguishes between the Fascism of the ‘Twenty Years’ between 1922 and Mussolini’s overthrow in 1943, and the ‘Second Fascism’ of the Italian Social Republic, which he considered as much more problematic. He likewise criticises the Fascist racial doctrine for being based on false principles. Frequently quoting Mussolini’s own words, Evola presents the core of the Fascist ideal, arguing that, for all its flaws, it remains superior to the political system which has since arisen to replace it. Julius Evola (1898−1974) was Italy’s foremost traditionalist philosopher, as well as a metaphysician, social thinker and activist. Evola was an authority on the world’s esoteric traditions and one of the greatest critics of modernity. He wrote extensively on the ancient civilisations of both East and West and the world of Tradition, and was also a critic of the political and spiritual movements of his own time from a traditional perspective.