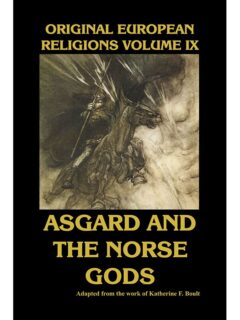 You are viewing: Original European religions: Asgard and Norse god

Original European religions: Asgard and Norse gods: Katherine F. Boult
DNA, history and archaeology have shown that the European people, or those of a close enough racial origin, have existed for around 40,000 years, of which Christianity has only been the dominant religion for less than one thousand.

This volume is a perfect introduction to the wonderful world of the Norse Gods by a master storyteller. Learn of the stories of the creation of the world, the adventures of the pantheon of Gods, as they were known, worshipped and feared by the Northern Europeans.

Find out how All-Father Odin lost his eye, how Thor came to his hammer, and how Loki spawned the beasts that helped bring about the Doom of the Gods and the fall of Asgard. Included in this majestic overview are the legends of the Volsung, Völund the Smith, the Nibelung (the Burgundians), the Rhine Gold, and the astonishing saga of Ragnar Lodbrog, the first of the great Vikings.