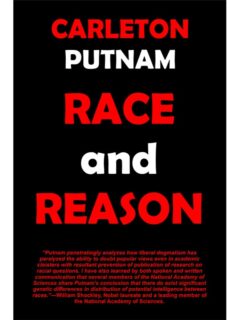 You are viewing: Race and reason

First published in 1961, this was the first major book to address race and racial differences in a calm, educated and sophisticated manner just as the “Civil Rights” revolution began sweeping America and overturning the established order.

Written by one of America’s most successful businessmen—the founder and president of Delta Airlines—Race and Reason is a question and answer format book dealing with race, racial differences, and which answers every liberal argument—and counter argument—with passion, reason, compassion and intellect.
Englanninkielinen
122 sivua