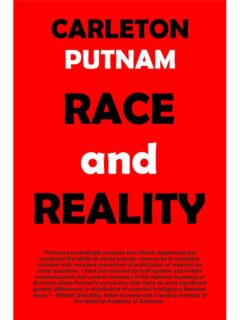 You are viewing: Race & reality

This book is a sequel to Carleton Putnam’s Race and Reason. Race and Reality brings up-to-date the story begun in the earlier volume.

Readers familiar with the latter will find summarized here Putnam’s essential viewpoint set in a fresh perspective. They will also find added documentation and much that throws new light on the world’s deepening racial crisis.

Written in the form of a midnight soliloquy, Race and Reality recounts the author’s experiences with the scientific hierarchy since 1961. It traces to its source our national bewilderment on the Negro question. It also reviews the balance of the evidence in regard to the hidden facts. The book then tells the inside story of the Stell trial and explores the methods by which the truth about it has been evaded and ignored.
Englanninkielinen
170 sivua