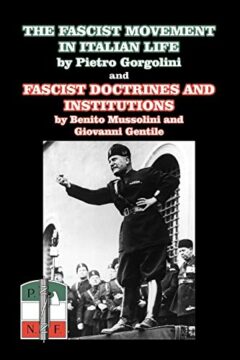 You are viewing: The fascist movement in italian life & fascist doctrines and institutions

The fascist movement in italian life & fascist doctrines and institutions

The fascist movement in Italian life: Pietro Gorgolini & Fascist doctrines and institutions : Benito Mussolini, Giovanni Gentile
These two major works—published independently in 1921 and 1935—together are the most complete encapsulation of Benito Mussolini’s National Fascist Party policy ever issued.

The first, The Fascist Movement in Italian Life, was written by an early associate of Mussolini, and explains in detail the origins of the Fascist movement before moving on to a detailed policy analysis.

Included in this overview is Fascist economic, agrarian, social and foreign policies—all dictated by a strong nationalist and anti-communist sentiment. The date of this work—prior to the Fascist ascension to power in 1922—provides the most open assessment of Fascist policy and its ideological foundation.

The second work, Fascist Doctrines and Policy, was co-written by Mussolini and the “philosopher of Fascism,” Giovanni Gentile, was written especially for the Enciclopaedia Italiana, and is an exposition of the Fascist position some twelve years after taking power—and before Mussolini fell under the influence of Adolf Hitler.

When both these works are studied, it can easily be discerned that Fascism in its original state had almost nothing in common with National Socialism, and that it is an ideological fraud to claim that Hitler was a Fascist. Original Fascist policy contains no racially-based policies at all, and was, as can be seen in this book, in fact very vague on many policies, relying primarily on an authoritarian personality cult built around Mussolini rather than any specific ideology.
Englanninkielinen
170 sivua