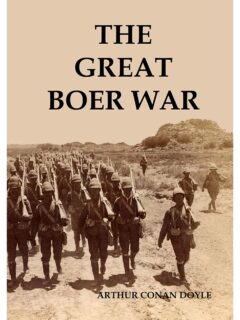 You are viewing: The great boer war

The great Boer war: Arthur Conan Doyle
Better known for his Sherlock Holmes books, Conan Doyle’s book was one of the first complete histories of the Anglo-Boer War as-it-happened.

Published in 1902, Doyle’s book became the standard by which all other histories of that conflict became to be measured.

“Take a community of Dutchmen of the type of those who defended themselves for fifty years against all the power of Spain at a time when Spain was the greatest power in the world. Intermix with them a strain of those inflexible French Huguenots who gave up home and fortune and left their country for ever at the time of the revocation of the Edict of Nantes. The product must obviously be one of the most rugged, virile, unconquerable races ever seen upon earth.

“Take this formidable people and train them for seven generations in constant warfare against savage men and ferocious beasts, in circumstances under which no weakling could survive, place them so that they acquire exceptional skill with weapons and in horsemanship, give them a country which is eminently suited to the tactics of the huntsman, the marksman, and the rider. Then, finally, put a finer temper upon their military qualities by a dour fatalistic Old Testament religion and an ardent and consuming patriotism.

“Combine all these qualities and all these impulses in one individual, and you have the modern Boer—the most formidable antagonist who ever crossed the path of Imperial Britain.

“Our military history has largely consisted in our conflicts with France, but Napoleon and all his veterans have never treated us so roughly as these bard-bitten farmers with their ancient theology and their inconveniently modern rifles.”—From the first chapter.

Now completely reset with two dozen unique and rare pictures from the conflict.

About the author: Sir Arthur Ignatius Conan Doyle (1859–1930) was a Scottish writer and physician, most noted for his fictional stories about the detective Sherlock Holmes, which are generally considered milestones in the field of crime fiction.
Englanninkielinen
262 sivua