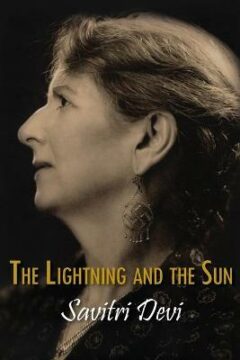 You are viewing: The lightning and the sun

The lightning and the sun

The lightning and the sun: Savitri Devi

Savitri Devi’s goal was to create a new National Socialist religion. She aspired to be the Saint Paul to Hitler’s Jesus. Paul of Tarsus took Jesus, who was a religious prophet and a failed political revolutionary, and turned him into a divine incarnation, creating a religion which served as the vehicle for the triumph of Jewish values over Rome. Savitri Devi sought to transform Adolf Hitler, who was also both a prophetic figure and a failed political revolutionary, into a divine incarnation-an avatar of the Hindu god Vishnu-hoping to create a religion that would serve as the vehicle for the triumph of National Socialism over egalitarian modernity.

In spite of its near-legendary status, The Lightning and the Sun is a notoriously hard to find book. The first edition consisted of only 1,000 copies and is quite rare.