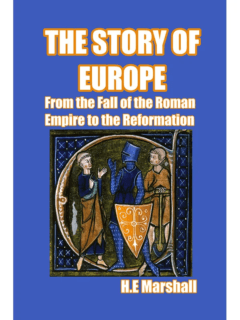 You are viewing: The story of Europe

The story of Europe

The story of Europe- From the fall of Roman empire to the reformation: HE Marshall

The Story of Europe: From the Fall of the Roman Empire to the Reformation. A wonderfully-written masterpiece of storytelling, originally designed for younger readers but which became popular with all ages because of its easy-to-read narrative, this book tells the story of the development of all the European nations from the time of the fall of the Roman Empire until just after the Reformation.

Acknowledged as an ideal introduction to the history of the European Middle Ages, this book is written in a rollicking early twentieth century style which pulls no punches in describing the racial issues which confronted Europe, as this quote from the section on the Ottoman invasion of Europe illustrates:

“The Ottoman Turks were the last barbarian tribe to settle upon European soil. They did not disappear like the Huns, they were not driven forth like the Saracens, they have in no way become Europeanized like the Hungarians or Magyars, they have remained Asiatic and alien, a blot upon the map of Europe to this day.”

Contains the full text and all the original charts, maps and tables.