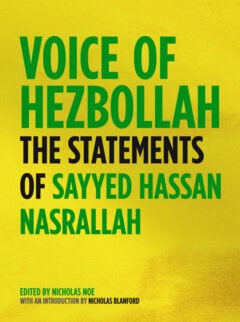 You are viewing: Voice of Hezbollah

In July 2006, with the commencement of hostilities between Israel and Hezbollah, Sayyed Hassan Nasrallah, the longstanding secretary general of the ”Party of God,” burst into the spotlight of the Western media – cast, almost inevitably, as an even more dangerous incarnation of Osama bin Laden. Yet well before the start of the war, Nasrallah had acquired an almost unrivalled credibility in the Arab world among admirers and detractors alike, a profile that soared in May 2000 when he became the first leader to push Israel out of Arab land.
Voice of Hezbollah brings to an English-speaking readership for the first time Nasrallah’s speeches and interviews: the intricate, deeply populist arguments and promises that he has made from the mid-1980s to the present day. Newly translated from the Arabic, and with an introduction by one of the foremost writers on Lebanon, Voice of Hezbollah is critical to the understanding of the man and the movement.