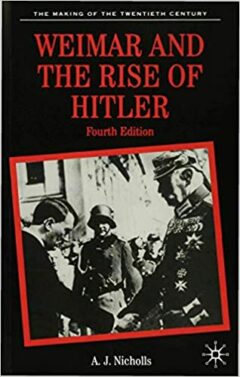 You are viewing: Weimar and the rise of Hitler

Weimar and the rise of Hitler

Weimar and the rise of Hitler: A.J. Nicholls

This fourth edition of the classic text on the Weimar Republic begins with Germany’s defeat in 1918 and the revolutionary disturbances which followed the collapse of Wilhelm II’s Empire. It describes the strengths and weaknesses of the new regime, and the stresses created by the economic difficulties of the 1920s. Adolf Hitler’s career is traced from its early beginnings in Munich, and the nature of his movement is assessed.
This edition, updated throughout and considerably expanded, takes full account of the last decade of research, including recent debates on the nature of the German revolution of 1918–19, the relationship between political upheavals and economic crises, and the question of whether there really was an alternative to the Third Reich in January 1933. The chronological table and extensive bibliography add to the book’s value as both an introduction to Weimar and a stimulus to further study.