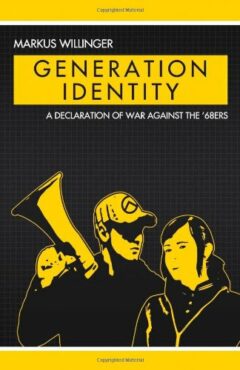 You are viewing: Generation Identity

Generation Identity: Marcus Willinger
The denial of the European peoples’ right to their own heritage, history and even their physical homelands has become part of the cultural fundament of the modern West. Mass immigration, selective and vilifying propaganda, and a constant barrage of perverse or, at best, pointless consumer culture all contribute to the transformation of Europe into a non-entity. Her native population consists mostly of atomistic individuals, lacking any semblance of purpose or direction, increasingly victimised by a political system with no interest in the people it governs. There are many views on how this came to be, but the revolt of May 1968 was certainly of singular importance in creating the apolitical, self-destructive situation that postmodern Europe is in today. This, however, is no history book. It is not primarily about how this came to be, but rather what can and should be done about it and, more to the point, who will do it. After the treachery of the political, journalistic and academic pseudo-elites and the complacency of an entire generation of Europeans which enabled it, it falls upon the young – the foremost victims of the derailing of Western society – to turn the tide. In Generation Identity, activist Markus Willinger presents his take on the ideology of the budding identitarian movement in 41 brief and direct chapters. Willinger presents a crystal-clear image of what has gone wrong, and indicates the direction in which we should look for our solutions. Moving seamlessly between the spheres of radical politics and existential philosophy, Generation Identity explains in a succinct, yet poetic fashion what young Europeans must say – or should say – to the corrupt representatives of the decrepit social structures dominating our continent. This is not a manifesto, it is a declaration of war. Markus Willinger was born in 1992 and grew up in Schärding am Inn, Austria. He has been politically active on the alternative Right since he was fifteen years old, and is now a student of history and political science at the University of Stuttgart.
Englanninkielinen
106 sivua