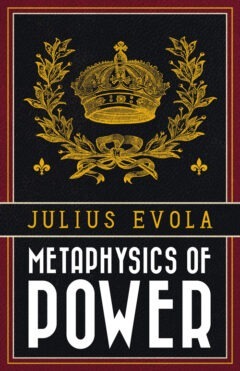 You are viewing: Metaphysics of Power

Coursing through much of Evola’s work represented here is the key notion of the four-caste system: king, warrior, merchant, and laborer; which is clearly explicated in Decline of the Idea of the State and often referred to in other articles. The theme — namely the deviation from this ancient and nearly universal tradition — is part of the bedrock of Evola’s critique on why the modern state often fails.

Various articles in this work touch on sensitive themes and demonstrate Evola’s nuanced approaches to issues such as divorce, the Catholic Church’s understanding of marriage, and individualism, but also handle with humor educational approaches such as the Montessori School, feminism, bureaucracy, and Europe’s modern nobility.

Most of these articles are translated here for the first time and offer the reader — in strong, erudite English matching Evola’s strong, erudite Italian — a deeper dive into Evola’s thoughts, philosophy, and opinions, while the tone of these articles ranges from patient and pedagogical to brutal and scathing. Metaphysics of Power represents a must-have for the seasoned disciple of Evola’s philosophy, but is also a unique opportunity for the novice in traditionalist studies as it offers smaller, tighter explanations of Evola’s views on key issues.