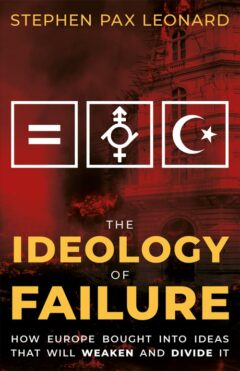 You are viewing: The Ideology of failure

The Ideology of failure

The Ideology of failure- How Europe bought into ideas that will weaken and divide it: Stephen Pax Leonard

We are living in unnerving times. Our societies are characterised by a social polarisation not known since the 1930s. At the same time, there is now one principal source of knowledge: Google, an omnipresent, omniscient (some might say) company embedded in the social justice warrior ideology. Just a handful of Californian companies control our digital lives. These companies and most public institutions employ the same commoditised speech code (diversity, inclusion etc.) that operates in a context of groupthink enforcing further the sense of polarisation.

Language is being increasingly policed and causing offence could now be a hate-crime in parts of western Europe. Amidst such infringements on the freedom of speech, a culture of silence is emerging. This can be seen in our universities. They should be theatres of open debate, but instead many shun viewpoint diversity. But, the toxic, zero-sum identity politics that currently plagues academia is spreading now to society at large.

This book explores the nuts and bolts of this identity politics that is weakening and dividing our Continent. The Ideology of Failure asks the most searching questions of the political correctness orthodoxy and gives the reader the tools to talk openly about the topics which we are made to feel awkward about discussing.