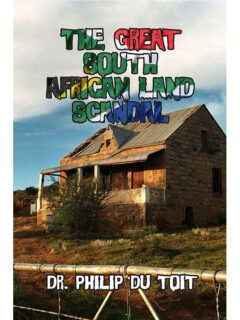 You are viewing: The great south-African land scandal

2007, thirteen years after adopting black rule, South Africa became a net food importer for the first time since its founding in 1652.

This book tells the story of South Africa’s “land reform” which, although proceeding at a slower pace than in Zimbabwe, is no less insidious and is leading to the same disastrous consequences.

White Afrikaner farmers are being driven from the land through a combination of murder, terrorism, and state coercion.

Almost every farm taken over by black farmers has collapsed and food production has plummeted. There are now around 30,000 white farmers left, from a high of 80,000 in 1980.

When first published, pressure was exerted by the South African government to suppress this book—and the reader will soon discover why as example after example of black failure is laid out with incontrovertible factual analysis.

This book lifts the lid on what is really happening to white South Africans since the ANC’s assumption of power, and serves as a dramatic warning to Western nations of their future should they allow Third World immigration to swamp their lands as well.