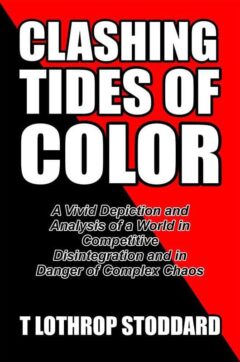 You are viewing: Clashing tides of color

“A Vivid Depiction and Analysis of a World in Competitive Disintegration and in Danger of Complex Chaos.” By T Lothrop Stoddard. The follow-up to the author’s famous “Rising Tide of Color” best-seller, this 1935 book was the very first racially-based geo-political analysis of world politics, written specifically from the white race’s point of view.

It focuses on the adoption of white technology by the Third World, and its implications for nonwhite population growth and the increasing of racial tensions across the globe.

Although some of the world events mentioned in the book—such as the USSR’s creation and the direction of “Red Russia”—have since been eclipsed by the passage of time and events, the book’s predictions on the development of racial relations as a result of the industrialization of the Third World are as accurate as ever.

Based on an understanding of race as being the primary determinant of a civilization’s culture, the author provides a logical and clear understanding of racial dynamics—and specifically the desire of the nonwhite Third World to seize what the white First World has—as the single driving factor in international relations. It makes a refreshing break from the boredom and total inaccuracy of present-day “political scientists” who prattle on about international relations as if race does not exist.

The underlying theme of the book—that all nonwhite races have adopted white technology and culture, with varying degrees of success, and that this will have serious results for international affairs—has in fact taken on added meaning since this book was written.

This new edition has been taken directly from a rare original, contains the entire original text, and has been completely reformatted and hand edited to the highest possible quality.
Englanninkielinen
342 sivua