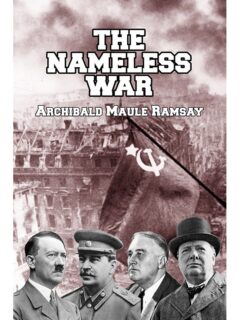 You are viewing: The nameless war

Dramatic historical work which blames the behind-the-scenes Jewish lobby in Britain for forcing that country into war in 1939 against Germany, written by a leading Member of Parliament for the British Conservative Party and confidant of then Prime Minister Neville Chamberlain.

The author—imprisoned without trial by the Churchill government for opposing the war—starts with an overview of the Jewish lobby’s involvement in revolutionary activity in Britain, France and Germany, and then moves on to discuss the Jewish declaration of war against Germany in 1933 as the point at which it was determined that there would be a physical war.

He also reveals much behind-the-scenes details of how the build-up to the war was engineered, the Churchill government’s staring and use of the systematic mass bombing of civilians as a means of spreading error, and of the backdoor machinations to bring the United States of America into the war. He then discusses his own detention under the infamous “Regulation 18B” and its after effects.
Englanninkielinen
115 sivua