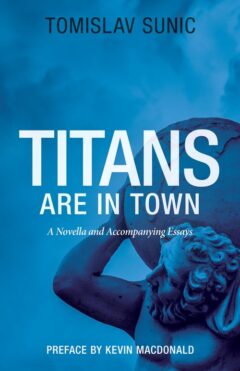 You are viewing: Titans are in town

Titans are in town

Titans are in town: Tomislav Sunic
Titans are in Town consists of a novella and cultural essays by Dr. Tomislav Sunic. In the novella and his essays, Sunic discusses the state of Europeans in their postmodern wasteland. Confronted by endless interracial chaos, Europe longs for the return of Titans. Based on Friedrich Georg Jünger’s seminal 1944 work Die Titanen, the dormant Titans represent the only salvation for slumbering Europeans. The Titans’ unexpected return from mid-earth will start a resumption of Europe’s greatness.

Sunic’s protagonist Held in his novella struggles to maintain his dignity amidst a dystopian landscape in which consumerism, alien migrants and a never-ending struggle against nobility of character are unceasing. Confronted by decay all around him, he fervently hopes for the return of Europe’s Titans as foretold by the ancient Greeks. They will augur an age in which Indo-European values are restored and degeneracy forever extinguished. These final days will reassert European mythos as superior to Judeo-Christian values. Held is an Everyman for the Current Year and his struggles are reflected in the experiences of today’s Europeans.

Dr. Sunic also includes essays concerning the current degradation present within contemporary education. Intended for curious students, he discusses such topics as literature and politics along with tragedy and mythos in ancient Europe and the modern West. Titans are in Town also offers a guide on what to read in order to better understand Europe’s ancient patrimony of myths and lore. Excavating through the rubble of high culture, Dr. Sunic capably depicts pathways towards real learning for young Europeans.
Englanninkielinen
230 sivua