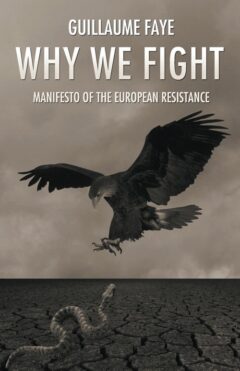 You are viewing: Why we fight

Why we fight: Guillaume Faye
Identitarians and others making up the European resistance lack a doctrine that truly serves as a political and ideological synthesis of who they are — a doctrine that speaks above parties and sects, above rival sensibilities and wounded feelings, that brings the resistance together around clear ideas and objectives, uniting them in opposition to the Europeans’ dramatic decline. Our people today face the gravest peril in their entire history: demographic collapse, submission to an alien colonisation and to Islam, the bastardisation of the European Union, prostration before American hegemony, the forgetting of our cultural roots, and so on.

In the form of an introductory text and a dictionary of 177 key words, Guillaume Faye, one of the most creative writers of the European ‘Right’, makes a diagnosis of the present situation and proposes a program of resistance, reconquest, and regeneration. He holds out the prospect of a racial and revolutionary alternative to the present decayed civilisation. The manifesto’s principal objective is thus to unify the resistance by developing a common doctrine that unites everyone and every tendency seeking to constitute a European network of resistance – a doctrine that goes beyond the old sectarian quarrels and superficial divisions. All relevant subjects, including politics, economics, geopolitics, demographics, and biology are broached. As it was for the Nineteenth-century Left with Marx’s Communist Manifesto, Why We Fight is destined to become the key work for Twenty-first century identitarians.
Englanninkielinen
278 sivua