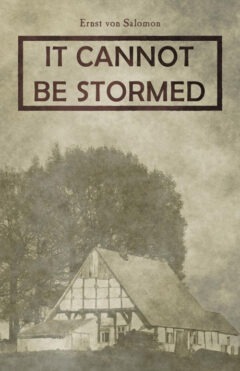 You are viewing: It cannot be stormed

It cannot be stormed

This is the story of the disaffected intellectual Iversen, who runs a small newspaper in Weimar Germany during the 1920s. He becomes involved in the Farmers’ Movement, a revolutionary organisation which forms around the archetypal, heroic farmer Claus Heim. Iversen heckles the oppressive, debt-ridden German institutions in the name of traditional peasants’ rights. A series of outrageous events prompts him to leave the countryside for an unspecified town in an effort to mobilise the forces of political dissatisfaction on behalf of the farmers’ interests. He prowls the fragmentary landscape of Weimar-era underground politics, vainly seeking allies among the Communists, National Socialists and anyone who will listen, never being quite sure where he stands or why. Finally he is left only with his sense of attachment to the rural life to which he’s never quite belonged, and his loyalty to Claus Heim, as he navigates a dark world that is careening toward disaster. Ernst von Salomon (1902−1972) was one of the writers of the German Conservative Revolution of the 1920s. A member of the paramilitary Freikorps, he participated in the assassination of Foreign Minister Walther Rathenau, for which he was imprisoned. He went on to write many books and film scripts.

It Cannot Be Stormed is one of his lesser-known works. As much a politico-philosophical tract as a novel, it describes both the ideology and the atmosphere of inter-war German counterculture through the eyes of a tragic hero.