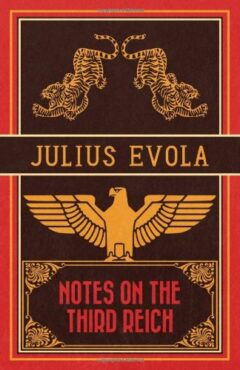 You are viewing: Notes on the Third Reich

Notes on the Third Reich

In the same manner as he critiqued Italian Fascism in Fascism Viewed from the Right, in this volume Evola analyses the German National Socialist movement, making a distinction between National Socialism as an ideology and the contingent circumstances which led to its defeat in the Second World War. He traces the origins of the movement among the veterans who returned from the trenches at the end of the First World War and who found themselves dissatisfied with the bourgeois, liberal society that arose in Germany during the Weimar Republic, and which in turn led to the rise of the paramilitary Freikorps units as well as the Conservative Revolutionary movement in intellectual circles. For Evola, all that was best in National Socialism had been inherited from this spirit. Overall, however, Evola takes the Third Reich to task for always remaining populist, for not establishing a genuine political order based on European traditions rather than a cult of personality, and for its misunderstanding of the issues of race and the Jews. All of this Evola attributes to a lack of connection to the transcendent and the traditional. Nevertheless, Evola recognises some good qualities in the Reich, and credits it with inculcating a strong warrior spirit and sense of the sacred in the German people, and for making efforts toward establishing an elite Order based on higher principles as embodied by the SS. While viewing the Reich as inadequate, Evola praises aspects of it for having been superior to the Europe which arose from its ashes, particularly when it represented pan-European impulses, as well as a rejection of both Communism and democracy in an effort to forge a political ‘third way.’