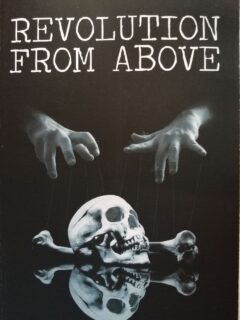 You are viewing: Revolution from above

Revolution from above: Kerry Bolton
In Revolution from Above, Dr. Bolton demonstrates that the supposed rivalry between Marxist-inspired movements and capitalism has always been an illusion. Marxism, Communism and liberalism have been and continue to be exploited by the forces of international capitalism to further their global agenda, despite their surface disagreements. Dr. Bolton shows that the ultimate goal of capitalism is to create a worldwide collectivist society of consumers, and Marxism is merely one means of attaining this. He traces this idea back to Plato, through the Illuminati, the Freemasons, the French Revolution, and Communism, and examines the evidence for the existence of a shadowy network of bankers who control a large portion of the world’s political and economic power. He then discusses the various instruments this network uses to maintain control, such as tax-exempt foundations and think tanks. Dr. Bolton also reveals how capitalist governments actually worked closely with Communist regimes and, in fact, frustrated genuinely anti-Communist efforts during the Cold War. He discusses the impact this has had on Western society, resulting in such trends as the sexual revolution and the promotion of drug use. Dr. Bolton then brings us up-to-date by discussing the role of the recent ”Arab spring” in these ongoing developments. One will never be able to view modern history the same way again after reading Dr. Bolton’s arguments and examining the supporting evidence. K. R. Bolton holds doctorates in Historical Theology and Theology; Ph.D. (Hist. Th.), Th.D. as well as in other areas. He is a contributing writer for The Foreign Policy Journal, and a Fellow of the Academy of Social and Political Research in Greece. His papers and articles have been published by both scholarly and popular media, including the International Journal of Social Economics; Journal of Social, Political, and Economic Studies; Geopolitika; World Affairs; India Quarterly; and The Initiate: Journal of Traditional Studies. His work has been translated into Russian, Vietnamese, Italian, Czech, Latvian, Farsi and French.
Englanninkielinen
258 sivua