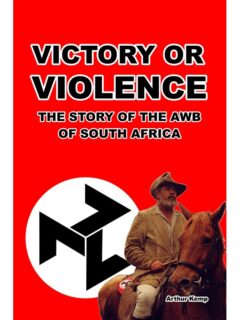 You are viewing: Victory or violence

Victory or violence: Arthur Kemp
he Afrikaner Weerstandsbeweging (AWB, or, in English, the Afrikaner Resistance Movement) was responsible for the bombing, and the many that followed. So serious was the AWB’s campaign of violent resistance against impending ANC rule, that the then government was forced to call out a state of emergency in the many parts of the country, as ANC sabotage squads targeted power networks railway lines, ANC and National Party offices—and more—in a wave of attacks which made all the ANC’s previous efforts at “armed resistance” pale into insignificance.

Read here of the early founding of the AWB, the backgrounds of its leading characters, the increasing militancy which accompanied the then government’s political reform program, the development of the movement’s ideological basis, and finally, the turn to violent resistance as the program to hand over control of the country to the ANC speeded up.

No understanding of South Africa’s history is complete without this largely eyewitness account of hardline Afrikaner resistance to the end of white rule.

This third edition is updated to include the 2011 murder of Eugene Terre’Blanche.

Illustrated throughout with many rare photographs, and fully indexed.
Englanninkielinen
303 sivua